Analog vs. Digital for Audiophiles

As our world becomes more digitized, so are the devices we use on a daily basis. We have come to the point of where cutting edge technology meets practical application. Hi fidelity, though far superior in the opinion of collectors and purists, is no longer considered hi-tech. Analog audio signals are being replaced by digital signals with the use of digital cables.

First, let us examine the basic differences between analog and digital. Analog sound is what has been traditionally produced by phonograph records and cassette tapes. They produce sound as a series of vibrations, just like the human voice. They travel through cables designed to carry an analog signal, such as composite cables (red, white, yellow). When the compact disc was introduced, the sound that it produced was digital; derived from an electronic system of 1's and 0's called binary language. The need for advanced cables to carry this new sound was met by the introduction of cables using coaxial and optical digital technology. Although there is more advanced cabling available, these are the two most popular digital cables for consumer audio use.

Coaxial digital technology is typically found in new home stereo systems and home theater systems. Digital coax cable does not resemble standard video coaxial cables that we use to connect cable or satellite television, but instead more closely resemble an RCA cable such as component (red, green and blue) or composite (red, white, yellow). The main difference is that there is only one connection as opposed to two or three. However, a digital coax cable is thicker and shielded to protect the signal from outside interference, just like standard coaxial. The reason they are popular with home theater is that they can handle a great deal of power (up to 75 ohm), which is usually generated by multiple devices used simultaneously. They are also less expensive than optical cables. The most obvious reason is that digital coax transmits pulses of electricity to generate digital sound, while optical cables transmit pulses of light. 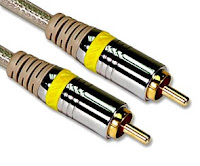 Optical cables are the most advanced way to carry a digital signal among digital components. They use a connector referred to as EIA-J. This connection is similar to the fiber optic cable connections used in data transfer between servers and telecommunications. Because they transmit light instead of electronic pulses, there is no danger of interference with the signal, which also does not diminish due to distance or environmental conditions. Because the optical cable is relatively unprotected it is also very fragile. The inside is made essentially of glass and can be easily damaged when bent. Please use the manufacturer’s guidelines when installing cables and devices. ~ SP